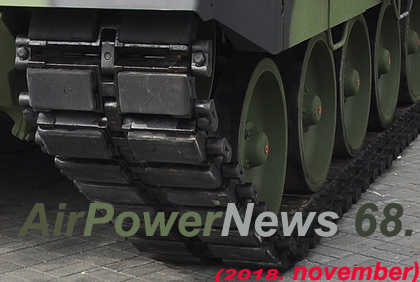 "Military Mobility
Netherlands, Belgium, Bulgaria, Czechia, Germany, Estonia, Greece, Spain, France, Croatia, Italy, Cyprus, Latvia, Lithuania, Luxembourg, Hungary, Austria, Poland, Portugal, Romania, Slovenia, Slovakia, Finland, Sweden
Adopted on 6 March 2018
This project will support Member States' commitment to simplify and standardize cross-border military transport procedures. It aims to enhance the speed of movement of military forces across Europe.
It aims to guarantee the unhindered movement of military personnel and assets within the borders of the EU. This entails avoiding long bureaucratic procedures to move through or over EU Member States, be it via rail, road, air or sea.
The project should help to reduce barriers such as legal hurdles to cross-border movement, lingering bureaucratic requirements (such as passport checks at some border crossings) and infrastructure problems, like roads and bridges that cannot accommodate large military vehicles."

A képaláírás viszont:
TORNADO IDS
98+60 (GS062) of
the Wehrtechnische
Dienststelle 61 (WTD 61) –
the German military flight
test centre – at Manching
air base with a new,
increased weapons load.
Seen on October 10, it
was carrying a load of four
Laser Joint Direct Attack
Munitions (LJDAMs) and
a Litening targeting pod.
This is the first evidence
of flight trials for the
Luftwaffe Tornado’s
latest ASSTA 4/4.1
configuration. As well as
LJDAM integration, this
standard is introducing a
Future Dispenser System
(replacing the old BOZ
pod) and enhanced
Multifunctional Information
Distribution System MIDS) capability
Válasz erre

The decision to withdraw from the INF Treaty gives Russia a free pass to deploy its GLCM capability, and put the blame on the US for the demise of the agreement. Meanwhile, it would take Washington at least 7-9 years to develop, test, and deploy a new ground-based intermediate range missile system. In addition, the new system would cost the kind of money that the US does not currently possess given their ongoing and planned nuclear modernisation programmes. Moreover, it is almost impossible to conceive that NATO could come to a consensus about the re-deployment of these weapons in Europe, back in the 1980s, the Pershing deployment almost “broke” the Alliance, and it is highly unlikely to pass easily today.
www.europeanleadershipnetwork.org/commentary/what-the-death-of-the-inf-treaty-means-for-europe/?fbclid=IwAR2oSPsYCLrF6tn-1OmRIliN0HfPXQh76R6NuI1F53eT9h70O15d6rF20us
Válasz erre