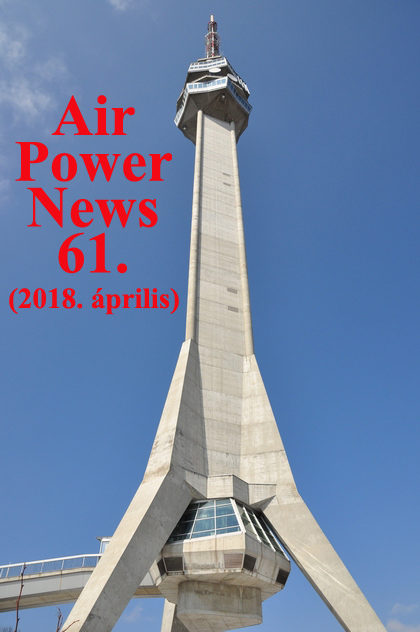 "A U.S. Air Force Thunderbirds pilot was killed when his F-16 Fighting Falcon crashed over the Nevada Test and Training Range"

"the US Air Force is moving a mobile armory depot from Incirlik's base."

"The news comes as a follow-up to the trend of shrinking US Air Force flight operations from the Turkish base, especially after the withdrawal of MQ-1B and the MQ-9's abolition in Afghanistan."
Válasz erre

"A South Korean fighter jet crashed into a mountain in a southern region Thursday, presumably killing the two pilots, the Air Force said."

"The MoD chose 5:30 p.m. on Easter Saturday to announce its controversial intention not to hold a competition to procure an 8x8 for the new Army strike brigades"

"Germany and France are planning to jointly develop a new maritime patrol aircraft to replace their P-3C and ATL 2 fleets. A Memorandum of Understanding will be signed by defence ministers Ursula von der Leyen and Florence Parly on April 27."
Válasz erre

"Australia has accepted delivery of our next 3 Joint Strike Fighters.

These latest aircraft are fitted with the program’s final software system, which unlocks its full war-fighting potential including weapons, mission systems & flight performance."

"At least 14 dead after missiles hit Homs airfield
The strike is thought to be a response to an alleged regime gas attack - but the US denies involvement, and Russia blames Israel."

"The Syrian Air Defense managed to shoot down several missiles that were targeting the T-4 Military Airport in the eastern countryside of Homs.

According to a Syrian military source in Damascus, the Syrian Air Defense shot down at least eight missiles that were targeting the T-4 Airport."

"Acc. Fars News Agency reports at least 4 Iranians have been killed in Israeli strike on the T-4 airbase in Syria."
Válasz erre

@molnibalage: The Starfighter also got to show its capabilities in humanitarian work. January 1. 1975 a patient in Oslo desperately needed a kidney from a donor in Tromsø and time was a critical factor. The kidney was flown in a Bell UH-1B from Tromsø to Bardufoss where a Starfighter was waiting. The fighter then flew directly to Gardermoen where medical personell took over, driving with police escort to the hospital. From the requets was sent till the kidney was at the operating table, only 5 hours and 15 minutes had past. starfighter.no/hist-en2.html
Válasz erre

"The federal government has embarked on a couple of initiatives to support the project to buy a new fleet of fighter jets for the RCAF. The aircraft will replace the air force’s CF-18s."

@zord: “If the offer is accepted, the first fighter planes should arrive in Slovakia by the end of 2022."

"Kelley declined to specify the cost of a flight hour, either. He only said that although the cost of Gripens might be lower, their service life would be less than those of F-16s."
Válasz erre

" A Russian helicopter with two crew members crashed in the Baltic Sea, one body was found, a source in the emergency services told Sputnik on Friday."

Syria strikes included: -TLAMs from 3 destroyers: Porter, Cook and Higgins. French Mirages, British Tornados, US B1 bombers (According to a US official)

Gen. Dunford: Russian guns and missiles remained silent during US, UK, French strikes, said only response came from Syrian military who fired some surface-to-air missiles to no effect

British Ministry of Defense: 4 Tornado participated in the raids

Al-Domair airfield was bombed by missile

"Finally Iran accepted Russia's request for use of 3rd Tactical Fighter Base of Iranian Air Force in Hamedan as point of refuelling & deployment of its strategic bombers in one condition, Russia must provide Pantsir &S-400 SAM batteries immediately to protect the base"
Válasz erre

"Rafael has been working closely with the Swedish manufacturer Saab to offer the upgrade package to users of the Gripen."
Válasz erre

"Sweden, for instance, is sensing an opportunity to showcase its Saab AB Gripen fighter jets ahead of a July deadline for bids in India’s procurement process of 110 locally-manufactured aircraft."
Válasz erre

Total 37 combat aircraft of US Air force were involved in the Syria Strikes among them three were 28th Bomb Wing B-1B Lancers flying from Al-Udeid AB, Qatar. Two of them launched 19 AGM-158B JASSM-ER cruise missiles at two different targets in Syria."
Válasz erre

"In total, the Syrian AD systems eliminated 71 cruise missiles of 103 ones.

Four missiles targeted the Damascus International Airport; 12 missiles – the Al-Dumayr airdrome, all the missiles have been shot down.

18 missiles targeted the Blai airdrome, all the missiles shot down.

12 missiles targeted the Shayrat airbase, all the missiles shot down.

Two missiles targeted the Tiyas airfield, all the missiles shot down.

Five out of nine missiles were shot down targeting the unoccupied Mazzeh airdrome.

Thirteen out of sixteen missiles were shot down targeting the Homs airdrome. There are no heavy destructions.

Almost 30 missiles and corrected air bombs were targeted research-and-development objects located near Barza and Jaramana. Five of them were hit by Syrian AD systems.

It is to be added that no one should be misled by low results made by S-200 air defence missile systems.

This system is primarily designed to hit aircraft. However, this system shot down a fighter of a neighboring country. The aircraft took efforts to intrude airspace of the Syrian Arab Republic.

"The Moscow headquartered transport company, best known for their fleet of mighty AN-124 freighters, have decided to terminate their Ruslan Salis commitment. By quitting the Strategic Airlift Interim Solution contract, they no longer carry any military equipment or humanitarian goods on behalf of most NATO and EU states as has been the case since the inception of Leipzig, Germany-based Salis in 2006. But the decision could be part of a big poker game between the Russian capacity provider and western countries."

Japan and China own about 5.3% and 4.8% of the U.S. debt, respectively. Japanese-owned debt doesn't receive nearly as much negative attention as Chinese-owned debt, ostensibly because Japan is seen as a friendlier nation and the Japanese economy hasn't been growing at an 7% clip year after year.

@Open Skies: Na most már látszik a párja is a 40es.
Válasz erre