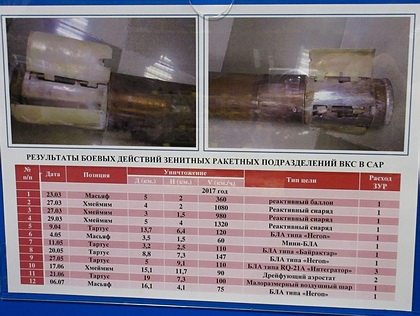 "The big question is what type of impact increased attacks on Russia's primary Syrian base could have. Vladimir Putin recently traveled to the outpost to declare victory against ISIS and anti-Assad forces in Syria. Continued attacks on the high-profile base would tell a different story, and if losses mount, the situation could potentially prove problematic for the Russian President, especially during an election cycle. But above anything else, these attacks are likely an indicator of how the conflict in Syria will morph in the coming months and even years.."

Ten UAVs were approaching the Russian airbase "Khmeimim" and another 3 - to the point of logistics in Tartus.

Six small-sized air targets by Russian electronic warfare units managed to take control, intercepting external control. Of these, 3 were planted in controlled territory outside the base, and 3 more UAVs at detonation detonated from a collision with the ground.

There are no injured or material damage to Russian military facilities.

The Russian air base "Khmeimim" and the point of the MTO of the Russian Navy in Tartus continue to operate in the planned mode.

As a result of the decryption of the data of the intercepted UAV, the exact place of their launch is determined.

Terrorists for the first time massively used UAVs of aircraft type, launched from a range of more than 50 kilometers using modern guidance technologies based on satellite GPS coordinates.

Technical expertise of captured aircraft showed that such attacks can be carried out by terrorists from a range of about 100 kilometers.

Engineering solutions used by terrorists in attacking Russian facilities in Syria could be obtained only from one of the countries that possess high technological capabilities to provide satellite navigation and remote control of the discharge of professionally assembled IEDs in designated coordinates. All UAV terrorists are equipped with barometric sensors and servo-drives to control the elevator.

In improvised explosive devices of terrorists attached to an aircraft-type UAV, fuses of foreign manufacture were used.

Currently, competent Russian experts establish channels for supplying terrorists with these technologies and devices, as well as the type and origin of explosives used for IEDs.

The fact of use by militants of drone unmanned aerial vehicles of an aircraft type indicates that the militants have transferred technologies that allow carrying out terrorist acts using similar UAVs in any country."

@Levente B.: itt van a Minoboroni honlapjáról is a cikk, képek, és videó: